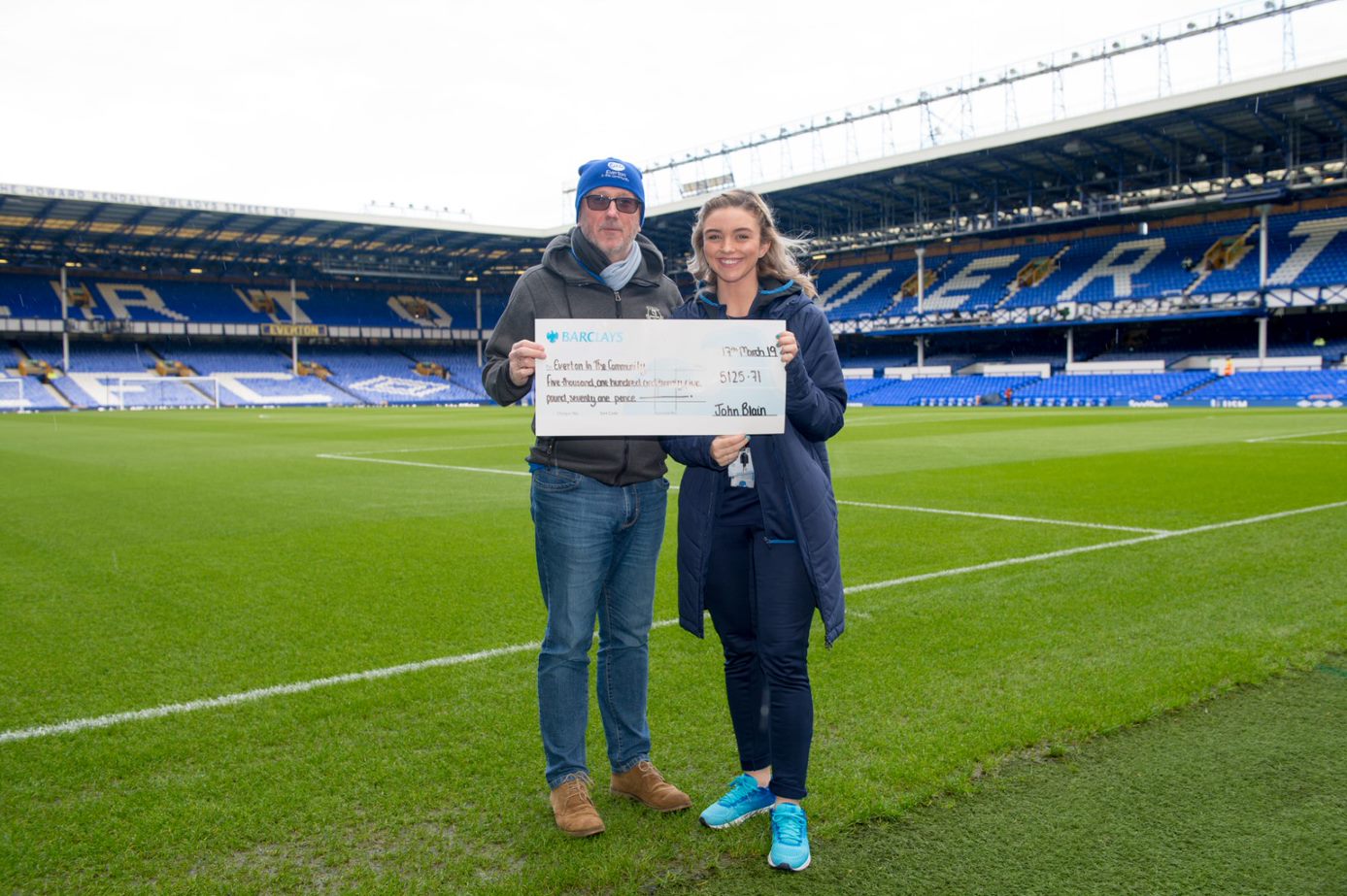 An Evertonian who has been fundraising for Everton in the Community for more than five years has revealed the motivations behind his long-term backing of the charity.

John Blain has raised in the region of £8,000 for the Club’s official charity through a variety of different fundraising challenges including 10k runs and stadium sleepouts.

And, ahead of Everton in the Community’s 33rd birthday fixture this weekend, the dedicated fundraiser is imploring others to follow suit, with demand of the charity’s services higher than ever before.

John’s latest challenge on behalf of Everton in the Community saw him conquer a ’12 Days of Cold’ challenge during the month of December.

“The challenge was to complete 12 different days of exercise from 1 December right through until Christmas Eve,” said John. “The daily events were pretty much anything, plus a 5k run. My son devised a schedule for me that included running, cycling, rowing and gym work, and I decided that I would complete the challenge in the first 12 days of December. Overall, with the running, cycling, and rowing, I covered just over 140km.

“I always choose Everton in the Community to fundraise for because I know the great work they do, and it is money that helps that work continue. Whilst they do spend money outside the region, the majority is spent inside and specifically in the city, and that is especially important to me.”

John chooses to test his physical limits to fundraise, however there are a whole variety of ways for supporters to fundraise for the award-winning charity of Everton Football Club. Click here to find out how you can show your support.

And while there are many causes that Everton in the Community supports, one in particular strikes a chord with John – the charity’s mental health work.

“The inspiration for me was doing some exercise but, also, raising funds for Everton in the Community, specifically for The People’s Place, provides that extra motivation for me as so many people have had their mental state deteriorate because of the pandemic,” said John.

“The People’s Place is a soon to be vital community asset and in the challenging times we find ourselves in, it cannot be commissioned too soon. Our mental health controls our lives and anything that helps people to be strong is a shortcut to a better society.”

Supporters who commit to raising funds for Everton in the Community provide an invaluable income stream to the charity’s 40+ programmes, all of which are specifically designed and developed to tackle social issues affecting the local community. From issues around mental health, employability and dementia, to education, disability, poverty and homelessness, the charity’s initiatives support people of all ages, cultures and backgrounds from over 130 venues across the city region, providing an open and inclusive approach for all.

For a dedicated fundraiser like John, not only is it knowing where the money is going that keeps him going during his fundraising expeditions, it’s also how it makes him feel.

“I get a great sense of achievement when I have done my challenges and an even greater feeling of satisfaction that there are hard-working people out there who are prepared to support me and, of course, the charity by donating their own money,” he said. “And not all of them are Evertonians or even residents in this country. “If anyone is considering raising money for a charity in this sort of way, or through another initiative, I would encourage them to do so and remember that every penny counts and they should not get hung up about how much they raise.

“Set an achievable target and keep people up-to-date on how you are progressing. Also, most people donate after the event so do not be shy at letting them know!”

John is currently aligning his exercise to Everton’s fixture list and will have the goalscoring exploits of Dominic Calvert-Lewin to thank should his exercise routine be extended.

“Currently, I am indoor cycling 50km every time Everton play,” he explains, “…and a further 50km for every goal DCL scores until the end of the season!”

Here’s to more goals from Everton’s number 9 and more distance covered by John!